In 1957 the club was offered the opportunity to operate a corn roast stand at the Butler Lions Frontier Days celebration. A stand was erected on the blacktop pavement on the main street of Butler. Ears of corn in the husks were roasted over charcoal fires, the husks stripped back and dipped in butter. The club ran into thunderstorms the second year, which almost washed them out business in the three day event.

It was at this time that the club voted to pursue this project by moving to the Wisconsin State Fair. Rental fees were high and this represented a big gamble, but hard work and continued process improvements have paid off. The first year’s sales were 20,000 ears of corn. 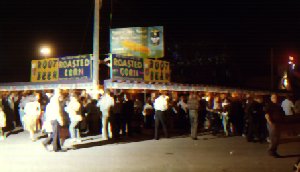 Many ideas for promotion of this project were tried, the most unique was in 1966-67 when the Boy Scouts ran an Olympic-style torch relay from the New Berlin City Hall down National Avenue to the corn stand at State Fair Park, to start the charcoal fires on opening night. 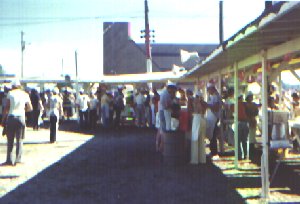 In 1975, the state-mandated that all buildings and stands be of a permanent nature. The present stand was built at a cost of over $50,000 with the Lions members doing a majority of the work. It was at this time that the “pits” were converted to a natural gas system. This allowed for easier start-up and clean up. Many people were entertained as the racks of corn were flipped over.

This project requires the participation of every Lion and Lioness for five shifts. Also, as in the past, the Lions have received free help from city departments, civic organizations, clubs and high school students. Through their help the club is able to return more money to the needs of the community.

In 1997, we began in use a new style of corn cooking machines. These are self-contained units with a chain drive unit to move the corn. These machines cook the corn much more evenly and are more fuel-efficient. 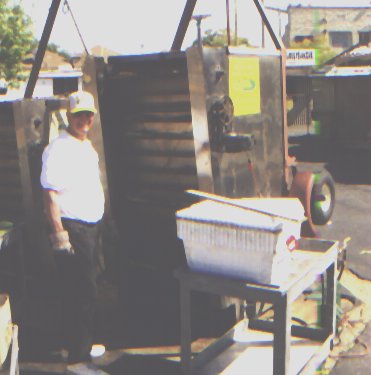 To enhance the visibility of the stand, for the 2004 Fair we added Cornelius, a 30-foot high inflatable ear of corn.